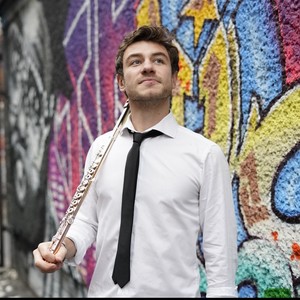 Learn Flute, Piccolo or improve your solfege with a professional Orchestral Player in Berlin!

I am a professional musician based in Berlin.
Currently I collaborate with many orchestras in Berlin, The Netherlands, France and Italy.

I am also a Master student at the prestigious Hochschule für Musik Hanns Eisler.

If you want to read more about me , below you will find my Bio :)

Born in 1991 in Seriate, Italy, Federico made his first steps in music at the age of 5.
He graduated in Flute at the Gaetano Donizetti Institute of Music of Bergamo at the age of 19 and the year after he was admitted to study at Codarts, Conservatory of Rotterdam - The Netherlands. There he studied with flute players Juliette Hurel, Herman van Kogelenberg, Julie Moulin and piccolo player Wim Steinmann.
In 2013 Federico won the audition to become academist for the Rotterdam Philharmonic Orchestra, and since then he regularly performs with them as flute 1st, 2nd and piccolo player.
In 2015 he won the audition to become member of NJO - National Youth Orchestra of The Netherlands, and from 2016 he is the principal flute player of the orchestra.
In August 2016 he graduated at Codarts and and in 2017 he was admitted to study at the Hochschule für Musik Hanns Eisler in Berlin; there he is currently attending a Master in Flute the class of professor Benoit Fromanger.
Federico is a very enthusiastic chamber music player and he performs regularly with the Rotterdam Chamber Music Society as flute and piccolo player, the Duo Fauré with pianist Amelia Santoso, the chamber orchestra Camerata Rotterdam and the Italian woodwind quintet “Indaco”.
He also strongly believes in performing and encouraging the composition of new classical music. In 2012 he was one of founders of the AKOM Ensemble, Rotterdam’s premier new music ensemble, and since then he performs for AKOM as as first flute and piccolo player.

The methode I use is tailored around your level, your needs and the goals you would like to reach!
I have experience as a performer (orchestral player, soloist and chamber musician) and as a teacher (I started following some pupils when I was 16 years old).
I can help you starting from zero (no need to be able to read music), I can help you entering a Music Hochschule, or even I can assist you as a performer that needs to reach excellence .

I am also teaching Solfege, Music theory, Piccolo and Saxophone !

Learn Flute, Piccolo or improve your solfege with a professional Orchestral Player in Berlin!